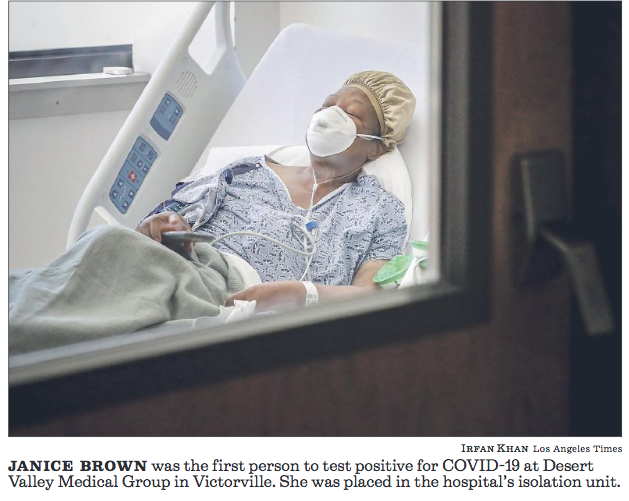 We are living through an unprecedented time unlike anything since 1968 except this time we are in the midst of the convergence of both the pandemic & racism. As we emerge we will all be changed and hopefully society will address aspects of institutional racism such as the social determinants of health which lay buried under the surface. Nowhere is this more evident than in New Orleans where the pandemic has killed more African Americans than even Katrina.

Here’s what can be done about the virus’ racial inequality. BY DEBORAH NETBURN

“There has not been a single year since the founding of the United States when people of African descent have not been sicker and died younger than white people,” said Dr. Mary Bassett, a former health commissioner for New York City and professor at Harvard’s T.H. Chan School of Public Health. The reason for this is clear, said Barbara Ferrer, director of the L.A. County Department of Public Health. “The root cause of health inequities is racism and discrimination, and how it limits access to the very opportunities and resources each of us need for optimal health,” she said.

As we’ve learned asthma, hypertension, diabetes & obesity are risk factors for being hospitalized with Covid-19 and these are both more common in African-Americans & related to inactivity. Keeping people active is a challenge when at home, but we are designed to move and it is the best medicine for musculoskeletal pain and so many other physical and mental health care issues.

Patients have been surprised how effective online coaching & TeleHealth is.

“I’m surprised, it’s even more personal than in person,” a recent patient said.

Here is a podcast episode about an elite cricketer Baxter Holt who was scheduled for spine surgery, but sought a final opinion via a Telehealth appointment. In this episode, Professor Peter O’Sullivan interviews Baxter to identify his experiences, worries and concerns relating to the use of Telehealth.

Many of you will be re-opening your gyms & clinics shortly.

Some health care clinics have stayed open as “essential service” throughout the pandemic.

With the pandemic we’ve been forced to reflect on how the modern rat race causes stress, pollution & social inequalities. This time of reflection has allowed us to engage in creative destruction. As is said, “don’t let a crisis go to waste”.

A recent article in the NY Times article on working from home said,

“The world is going to be different when we come out of quarantine, and our habits and how we use office space will absolutely be different…It really took the lockdown, if you will, to accelerate those trends.”

“No single precaution will 100% prevent you from catching the coronavirus, but the more layers of protection you add, the lower the risk becomes, experts say. Think of how many safety features your car has: Seat belts, airbags, bumpers, anti-lock brakes, backup cameras, an alert when you’re drifting out of your lane. None of those things will singularly prevent all car accidents or injuries, but used in conjunction they minimize your risk. That’s what you’re doing when you wash your hands frequently, wear your mask, stay six feet away from others, and monitor your symptoms and avoid leaving the house when you don’t feel well.”

A final word about the new society we hope will emerge after the convergence of the pandemic.

“Deep down in our non-violent creed is the conviction there are some things so dear, some things so precious, some things so eternally true, that they’re worth dying for. And if a man happens to be 36-years-old, as I happen to be, and some great truth stands before the door of his life – some great opportunity to stand up for that which is right.